Is the Hornet Our Key to Renewable Energy? 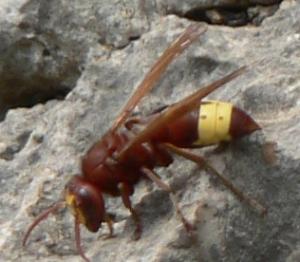 As every middle-school child knows, in the process of photosynthesis, plants take the sun’s energy and convert it to electrical energy. Now a Tel Aviv University team has demonstrated how a member of the animal kingdom, the Oriental hornet, takes the sun’s energy and converts it into electric power (in the brown and yellow parts of its body) as well.

“The interesting thing here is that a living biological creature does a thing like that,” says physicist Prof. David Bergman of Tel Aviv University’s School of Physics and Astronomy, who was part of the team that made discovery. “The hornet may have discovered things we do not yet know.” In partnership with the late Prof. Jacob Ishay of the university’s Sackler Faculty of Medicine, Prof. Bergman and his doctoral candidate Marian Plotkin engaged in a truly interdisciplinary research project to explain the biological processes that turn a hornet’s abdomen into solar cells.

The research team made the discovery several years ago, and recently tried to mimic it. The results show that the hornet’s body shell, or exoskeleton, is able to harvest solar energy. They were recently published in the German journal Naturwissenschaften.

Discovering a new system for renewable energy?
Previously, entomologists noted that Oriental wasps, unlike other wasps and bees, are active in the afternoon rather than the morning when the sun is just rising. They also noticed that the hornet digs more intensely as the sun’s intensity increases. Taking this information to the lab, the Tel Aviv University team studied weather conditions like temperature, humidity and solar radiation to determine if and how these factors also affected the hornet’s behavior, but found that UVB radiation alone dictated the change.

In the course of their research, the Tel Aviv University team also found that the yellow and brown stripes on the hornet abdomen enable a photo-voltaic effect: the brown and yellow stripes on the hornet abdomen can absorb solar radiation, and the yellow pigment transforms that into electric power. The team determined that the brown shell of the hornet was made from grooves that split light into diverging beams. The yellow stripe on the abdomen is made from pinhole depressions, and contains a pigment called xanthopterin. Together, the light diverging grooves, pinhole depressions and xanthopterin change light into electrical energy. The shell traps the light and the pigment does the conversion.