Here at Energy Farm we pretty much like trying to power anything with solar power.  Of course residential houses and business are our main area of of interest but our staff like to try their hand to running other things. We have solar powered hats, kids toys, water pumping systems, radios and iphone charges. But none of us have a solar powered boat. But after seeing this we know we want one!

A vessel seemingly straight out of a vintage James Bond movie will slip into Miami’s Government Cut sometime around 8 a.m. Saturday.
The craft, a strange mash-up of gleaming glass arrowhead, sleek flying saucer and knife-nosed catamaran, was not designed by an evil madman plotting world domination. It’s the brainchild of Raphael Domjan, a Swiss engineer and self-described “eco-adventurer” with a not-all-that crazy scheme to circle the world using only sunshine for fuel.
“We want to show what we can do with solar power,” said Domjan during a satellite phone interview last week as the world’s largest solar-powered boat cruised north of Haiti bound for a four-day stop at Miami Beach Marina, one of only two planned in the United States. “We have the technology to change the world, not tomorrow, but today.”
The 102-foot-long Turanor PlanetSolar — which its team of Swiss-German builders says translates into “power of the sun” in the Elvish language JRR Tolkien invented for Lord of the Rings — is far from the first boat to run on the sun.
Back in 2007, the 46-foot Sun21 catamaran arrived in Miami from southern Spain to complete the first Atlantic crossing by a solar boat. Dozens of domestic builders now offer small craft capable of plying lakes or Biscayne Bay. But the Turanor is the biggest, most advanced and easily most eye-catching design yet. It’s also built with the ambitious goal of circumnavigating the globe without burning a thimble of gasoline. 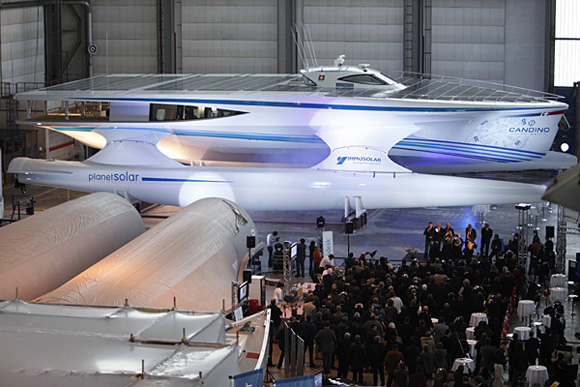 COMPLEX COURSE
Nearly two months into an Atlantic Ocean crossing that began in Monaco, Domjan said the sailing was mostly smooth for him and a five-member crew. Of course, in a solar-powered craft, charting a course isn’t as simple as plotting straight lines in the global positioning system. Instead, they study daily weather reports to steer toward bright sun and favorable winds.
“What we are doing now, nobody does this sort of navigation,” he said. “We have to find the sun to go as fast as possible.”
Built by a German yacht maker with weight and energy efficiency the foremost concerns, the Turanor’s deck is covered in 5,700 square feet of photovoltaic panels of thin glass that are still tough enough to withstand waves and the weight of crew members. Underway, the crew can extend more panels like wings, increasing the boat’s length to 115 feet and its beam, the nautical term for width, from 50 to 75 feet.
The solar cells generate power to charge to what is also billed as the world’s largest lithium ion battery. The builders say the massive 13-ton unit will hold enough juice to run the vessel’s electric motors, computers and navigation systems overnight and for up to three cloudy days — or more if running on minimal power.
The catamaran also was constructed of light but strong carbon fibers with sharp-nosed “wave-piercing” hulls designed to both reduce ocean drag and electrical drain on twin motors.
Domjan, whose eclectic background includes stints as a mountain guide and ambulance driver, first came up with the idea for the undertaking in 2003 after his company installed solar panels to run its computers. A friend introduced him to Immo Stroher, a German investor with interests in several renewable energy companies.
Stroher said it didn’t take him long to jump aboard and bankroll a vessel he figures cost him about 15 million euros, roughly $20 million.
“I was really excited about the idea of going around the world,” he said.
Stroher doesn’t expect immediate profit from the PlanetSolar project, which has since added additional sponsors, but he hopes a voyage promoting the possibilities of solar will pay off in the long term — for his companies and a planet with what he views as a damaging fossil-fuel addiction.

THE SAVINGS
“What you put on a boat, you can put on a car, you can put on a roof top, you can put in the desert and produce energy that in the end will be cheaper than any kind of other energy,” he said. Perhaps eventually. For now, nascent renewable sources typically run far more expensive than fossil fuel and nuclear — though, as Stroher point outs, those calculations don’t factor in the costs of dealing with pollution and radioactive waste.
Though the Turanor’s design is extreme, much of the technology has practical real-world applications for marine and other industries, he said. 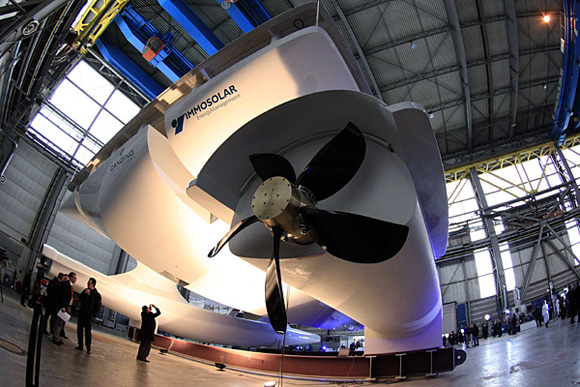 AT ANCHOR
It would require far too many panels to propel huge, heavy tankers but solar arrays might provide all the power a ship needs while at anchor, Stroher said, eliminating the need for running diesel engines that pump out foul fumes.
Many small boaters already use solar panels or wind vanes to charge batteries but improving technology that can put solar cells in flexible plastic promises expanded benefits, he said. In Australia, one company is even trying to tap two renewables at once by covering a hard sail with solar cells.
Still, for all its high-tech, the Turanor still has some serious limitations as an ocean-going vessel — most notably in the speed department.
Its electric motors can pump out perhaps 130 horsepower at full power, Domjan said, but that would drain the batteries within 10 hours. Typically, the boat putts along powered by about 30 horses going to the twin props. The typical 14-foot whaler in South Florida boasts an outboard with more giddy-up.
For the Turanor, wind also can be boon or bane. With favorable conditions, the boat was breezing along at a 6.5 knot clip toward the Turks and Caicos Islands at midweek but at other points, the crew has had to fight the wind. Just off Monaco, the boat encountered squalls with 40-knot headways.

FEELING SAFE
Handling an underpowered vessel can be a nightmare, even downright dangerous, in rough weather but Domjan said the boat proved solid and “really safe.”
“We were sailing with the wind against us,” he said. “The boat was still going, not that fast, of course.”
In comparison, the typical sailboat puts that other renewable energy, wind, to far more efficient and less expensive use, easily matching the Turanor in speed. Some designs can routinely top the 20 mph mark and even hit 40 mph or more — at least for short periods.
Stroher said he has heard that point raised more than once.
“Some people say, `You have built the most unnecessary vessel in the world because it is running without an engine,’ but that’s what people have done with sails for 3,000 years,” he said, laughing. “They are right, of course. It’s not my main purpose to have boats or ships run on solar but to show what renewable resources are able to achieve.”