Cities keep sprawling and arable farm land keeps shrinking. But Sweden is building a new element into this equation – a skyscraper farm.

Instead of just worrying about rising food prices and uncertain supplies, the Swedish city of Linkoping has already started building a possible solution for its 100,000 population. 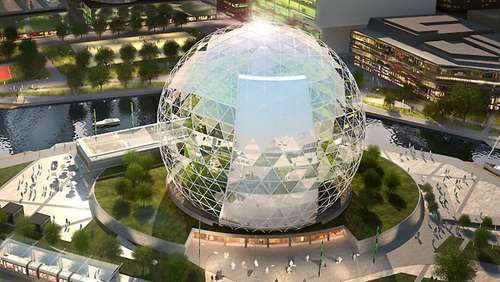 A Concept drawing of the ‘vertical farm’.

Work on a 17-storey urban greenhouse in the heart of the city began in February and it is expected to start growing its first produce by the end of next year.

Vertical farming is not a new concept. But this is its first real application. The Linkoping urban greenhouse, as designed by architectural firm Plantagon, will be a conical glass building that uses an extensive internal conveyor belt-style system to move potted plants from seeding, growing and harvesting stations.

As the plants move under the glazed walls and ceilings their pots will be rotated to give the fruit and vegetables optimal exposure to available sunlight.

Excess heat and CO2 from a nearby power plant will be funnelled into the glass dome to warm and feed crops in Sweden’s chilly winter.  Other benefits include reducing the distance the produce moves from the farm to the plate, a ready destination for suburban compostable wastes and a source of combustible methane for energy users.  Growing plants in such a controlled environment will also reduce how much water and pesticides they need.

Plantagon says to expect such “plantascrapers” to appear in a suburb near you. By 2050, about 80 per cent of the world’s ballooning population will live in cities, the architectural firm says. Feeding the 9 billion people will need as much extra farmland as the whole of Brazil.

Stuttgart, Germany, and Barcelona, Spain are understood to have signed expressions of interests in the sky farms.