WESTERN Australia looks set to host the country’s first ever power station utilising Solar Updraft Technology, with a project scheduled to get underway in the state’s Midwest.

Perth-based Hyperion Energy is currently seeking regulatory approvals to build a 200 megawatt Solar Updraft Tower (SUT) on 127,000 hectares surrounding the township of Tuckanarra, in the Midwest region of Western Australia. Hyperion says the 1,000m high tower, if it was built today, would be the tallest structure in the world.

A spokesperson for the company says a huge advantage of the groundbreaking technology is that SUTs do not rely on the sun shining all the time to generate electricity, with the Midwest site able to produce power 24 hours a day every day of the year. 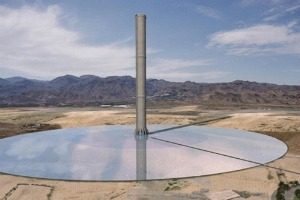 “When the sun is not shining, there is still enough heat retained under the big collector panels to keep the turbines moving,” he says.

“When most people think of solar they think of panels on a roof, whereas this is quite different. The technology uses what is effectively a very tall chimney using the principle of heat rising to create an updraft that forces the turbines to turn and generate electricity”.

Central to the project is a 1,000 metre high tower surrounded by a collector membrane and panels at the base, that uses the sun’s energy to warm the air underneath the canopy. This warm air rises through the tower, turning the blades of 32 turbines within the shaft.  During the night, heat stored in the ground during the day is released to keep the turbines in motion.

Managing Director Dallas Dempster says with an average annual horizontal solar radiation of 2300MJ/m2, the uninhabited terrain is ideally suited to the construction of SUTs and will help fuel a range of resource projects planned for the midwest.

“This plant will provide a sustainable, environmentally-friendly way to generate baseload power for Western Australia…in an area with the highest solar radiation levels in Australia,” he says.

While the project is a first for Australia, Hyperion says the technology is proven following a recent feasibility study to assess the viability of selected sites for SUTs in WA, including the topography, meteorology, soil conditions and earthquake loads.

Hyperion says the approval stage should be completed by the end of 2012 with a 24-30 month construction stage to commence in 2014.